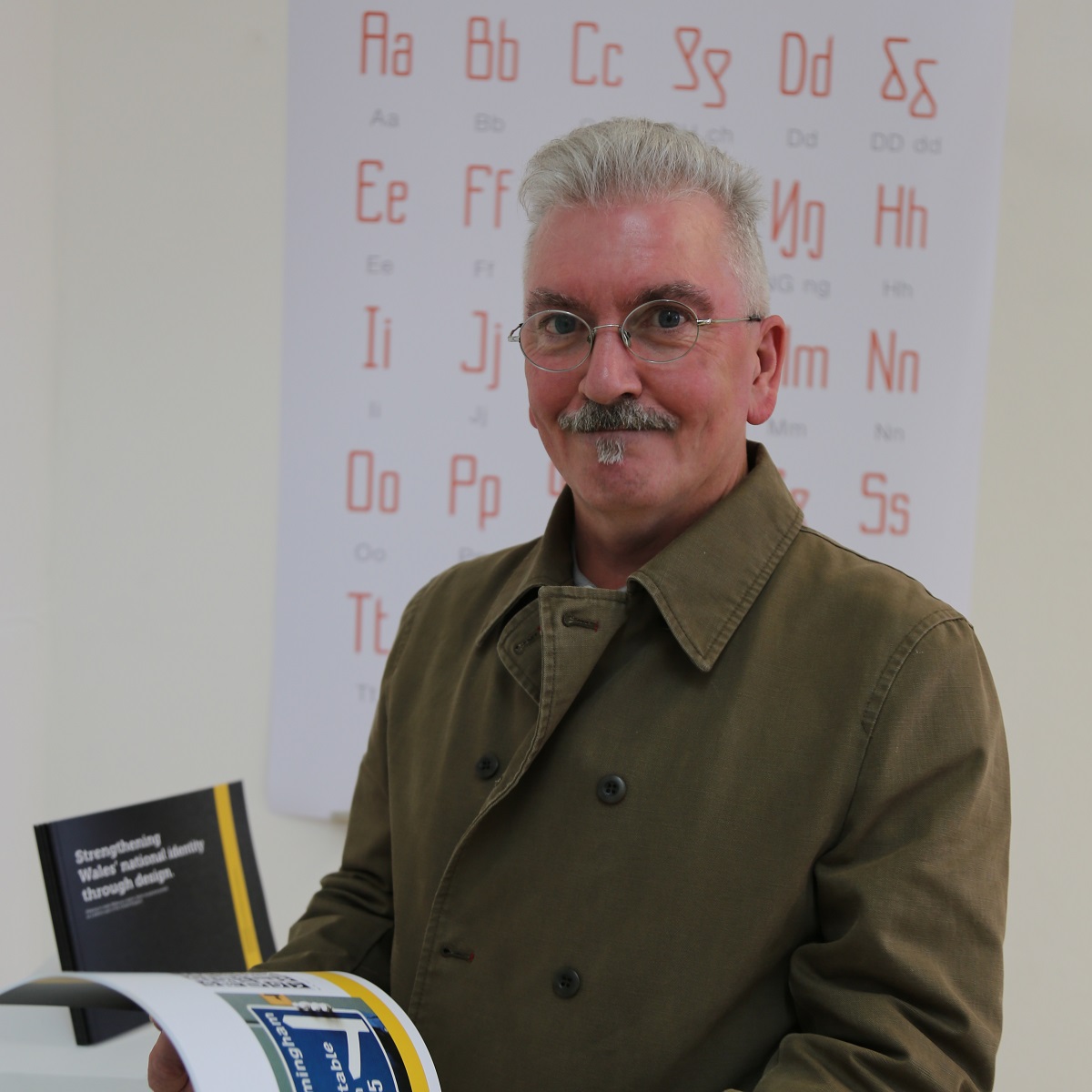 Are new road signs – with a new alphabet – the way to help strengthen Welsh national identity?

An innovative display at an annual event showcasing work by Glyndŵr’s Masters art and design students put forward a scheme to do just that.

Graphic designer Carl Edwards, who comes from Mold, has devised new Welsh letters to be displayed on road signs across the country.

Carl, 55, an MA Design Practice student, identified an opportunity for the new characters due to confusion caused by the double letters used to represent the language’s distinctive sounds to help modernise the language and give the country a distinctive atmosphere as they travel.

The fluent Welsh-speaker who is passionate about his country’s culture and language, has created eight new letters which represent the sounds made by the present double letters.

He said: “These letters don’t work effectively and cause confusion. For example, the ‘DD’ when pronounced doesn’t event contain the sound ‘D’.”

Carl was inspired to create the rune-style lettering during his during his time at Glyndŵr after trips to Athens and Warsaw as part of the Alien project, a pan-European cultural exchange project.

“I noticed that every time you go to another country, apart from the obvious language difference, the first thing that hits you is the signage – airports, seaports, any type of road transport,” he said.

“I spoke with some other designers - as well as linguists, economists and educationalists - and I realised that in Wales there’s no identity that’s clear to everyone when you come here; and that started me thinking.”

The former Ysgol Maes Garmon pupil has crafted a new typeface, along with new colourways and directional arrows to give the signs a different look from those elsewhere.

Inspiration from the characters came mainly from the work of Edward Williams, better known as Iolo Morgannwg – a controversial 19th century antiquarian and poet who devised Coelbren y Beirdd, or the Welsh Bardic Alphabet.

He also received encouragement from highly-respected graphic designer Steve Heller during a workshop.

Carl is an experienced commercial graphic designer, with 30 years of experience in the industry, and has fine-tuned his talents on BA and MA courses at Glyndŵr.

He was full of praise for the standard of teaching and support offered by the Art and Design lecturers.

“They really supported me and helped me on my course, both on the BA and MA – everyone has been a big help to me,” he said.

“The course has been brilliant, I must say. It’s the first time I’ve done anything that’s not commercial, so it’s nice to do something for me.”

Carl aims to continue the project as part of a PhD course and hopes that the idea will catch on among Welsh speakers.

“I feel strongly about the language and it would be nice for it to move forward – anything that helps Welsh identity is the point of the project really,” he said.

“It would be nice if someone actually took it up and I’m hoping for a positive response!”

“His project is just one of the fascinating artworks being exhibited at the degree show, with artists displaying the skills they have developed at Glyndŵr in a wide variety of media.”