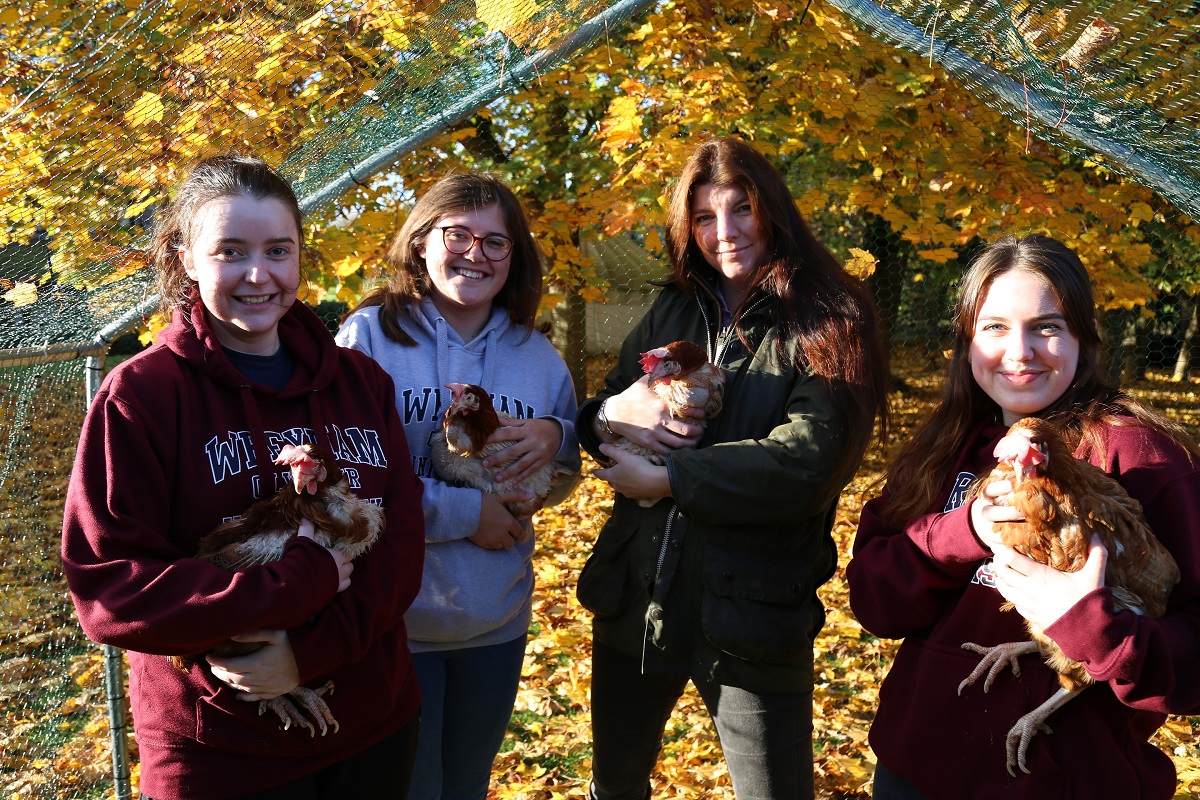 A brood of ex-commercial egg laying hens which were destined for slaughter have found themselves in a caring new home – at Wrexham Glyndwr University’s Northop campus.

The five birds, who had spent the first 16 months of their lives in a cage, have moved into a specially-built coop in the grounds of the campus in Flintshire.

They are being looked after by students on the university’s land-based courses under the guidance of lecturers on Glyndwr’s BSc Hons Animal Behaviour, Welfare and Conservation Science course – including Programme Leader Angela Winstanley.

She said: “It has been lovely to welcome the chickens onto campus and to see them settling in, feeling grass under their feet, and seeing the sky for the first time.

“We’re already starting to notice a change in their behaviour as they adapt into their surroundings, and they are proving very popular with our students with a rota already underway for volunteers to help feed and care for the new inhabitants.”

Among the students helping to care for the chickens are Elise Mattingley, from Barry, Catherine Alice Rees, from Welshpool, and Megan Williams, from South Yorkshire.

Catherine said: “When they arrived, the chickens were missing a lot of feathers – we want to see them grow those feathers back while they are here with us on campus.”

Elise added: “I think we are all very excited to see the chickens on campus – watching them settling in has been great. We are hoping to have cakes when their feathers grow back!”

And Megan said: “We are beginning to see the differences in each bird’s behaviour and the way they interact now. You learn a lot in lectures – but you can also learn a lot just by seeing these animals and watching them from day to day.”

The University have adopted the birds with the help of Shropshire charity Red Hen Rehoming. Angela met with charity volunteers at one of their bases in Wem, near Shrewsbury, to collect the hens before taking them to their new home at Northop.

“We rehome these girls as pets and we were delighted when Angela got in touch and said the University wanted to give a home to five and they would be cared for by students.

“We’ll keep in touch and see how they are doing and, hopefully, it will encourage others to want to give a home to a few, to save them from slaughter.   They make lovely pets, with their own individual personalities - we’re sure this will have been noticed by the students.

Angela added: “We are very pleased to have been able to offer these birds a caring home with the help of Red Hen Rehoming.

“Seeing the hens transform as they regrow feathers and regain the colour in their combs will help to boost the wellbeing of our students too – it’s rewarding to care for the birds and students can learn more about animal behaviour and welfare through direct interaction.

“We’d like to thank Red Hen Rehoming for their help and the invaluable work they do rehoming hens – and look forward to making our new companions feel very much at home on campus.”

To find out more about Red Hen Rehoming click here.

Animal Science at Wrexham Glyndwr University has been rated first in the UK for overall satisfaction and learning community in the 2019 National Student Survey*.