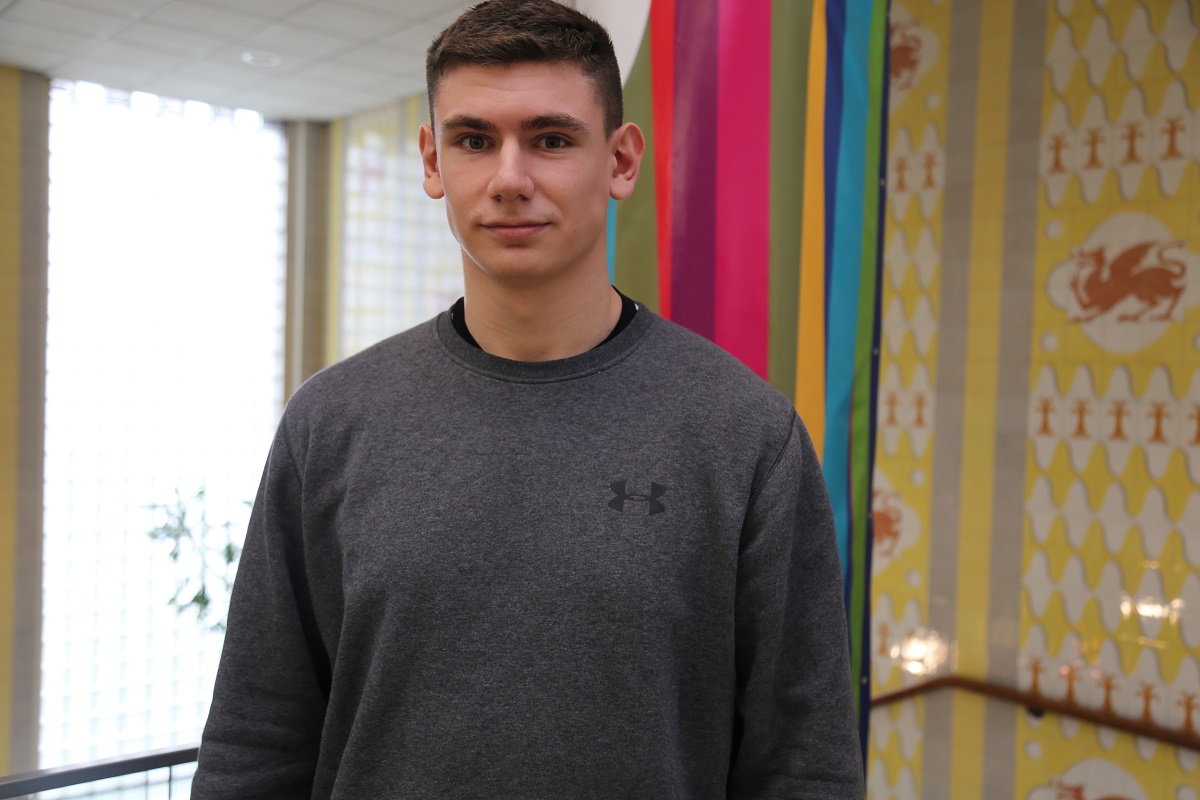 A keen rugby player is tackling both academic study and an industry career at the same time – thanks to a Degree Apprenticeship at Wrexham Glyndwr University.

Callum Leonard, who is studying at the university for a BSc in Computing, is combining his studies with both an apprenticeship at international pharmaceutical company Wockhardt UK’s offices on Wrexham’s Industrial Estate, and a role playing in the reserves a North Wales rugby league team.

He said: “It’s great studying at Glyndwr for a degree apprenticeship. It gives you the experience of working – which looks good on your CV – and getting a qualification as well, at the same time.

“I am enjoying applying the knowledge that I am gaining here at Glyndwr directly to the work I am doing in Wockhardt.

“The degree has lots of short modules – but in those short modules, there’s a lot of content, so you are learning a lot. If I’m using what I am learning at work already, then it shows that they are doing something right!”

Callum has found that the unique way that Glyndwr’s Degree Apprenticeships are delivered – where students visit the university for one day a week while working full-time for the rest of the week – to be an ideal fit for both his career – and his extracurricular activities.

He said: “I’m a keen rugby player – I’m actually a reserve for the North Wales Crusaders. Combining that, my work at Wockhardt and my studies at Glyndwr actually all fits together really well!

“At Wockhardt, I work as an IT apprentice – I started in my role September 2018 and I began studying at Glyndwr in May last year.

“It’s a really fun job and I’ve been finding things very enjoyable. It’s the kind of place where, once you know what the company produces, you start seeing its products everywhere you look.

“The flexibility the company has offered helps – and it works well with the degree apprenticeship – they give me quite a lot of time in which to do my course and develop my skills, whether that is here at the university or when I am in work.”

Callum has been impressed by his experiences at Glyndwr – and would recommend others to consider a similar course as a result.

He added: “It is a friendly environment at the university – it is always nice to come in and study here and I would certainly tell people to look into doing a degree apprenticeship.

“Be prepared, as the course has a lot of hard work on it, as you would expect – it is a full course which you fit in alongside your work. If you make sure the course is for you, and that it fits with your interests and your role, you’ll definitely get things out of it.”

Anne Burrows, Senior Systems Analyst at Wockhardt UK, helped to link Callum and Glyndwr up – and said she found the process simple, easy, and efficient – unlike other options the company had considered.

She said: “From the outset Glyndwr clearly explained the apprenticeship framework, what qualifications were required to enrol on the course, what was expected of the student and the employer.  I’d like to thank Christina Blakey at Glyndwr – as this information did not easily flow from other institutions we approached.

“The programme being offered by Glyndwr aligns nicely with the job role, benefiting both the student and the employer.

“We have had difficulty in retaining software developers in a role for more than a couple of years, once they had developed their skills further they would look to move on to bigger software houses.

“After the last one left we took the decision not to replace that role directly but recruit an apprentice who we could train and would be with us throughout their apprenticeship of four years and hopefully longer after that.

“The Degree Apprenticeship is a  two way partnership, and for IT this is the best option.”

To find out more about Degree Apprenticeships at Wrexham Glyndwr University contact the university’s Enterprise team via email on enterprise@glyndwr.ac.uk