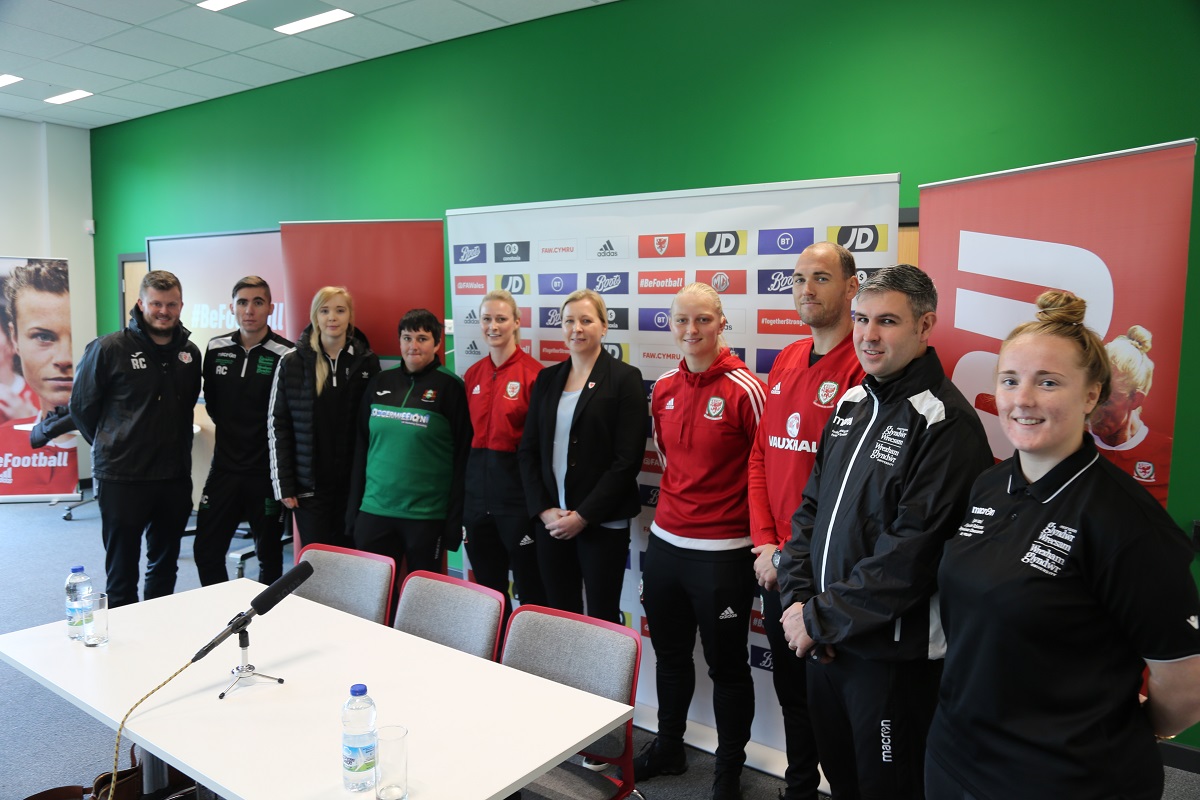 Glyndŵr students gained a valuable insight into international football while using their coaching skills to encourage more girls to take part in the game.

Students from Wrexham Glyndŵr University’s BSc (Hons) Football Coaching and the Performance Specialist degree were at Colliers Park as the Wales women’s squad for the upcoming UEFA Euro 2021 qualifying match with Northern Ireland was revealed.

The students had the chance to quiz manager Jayne Ludlow and players Elise Hughes and Rhiannon Roberts during a media conference at the National Football Development Centre in Gresford.

Wrexham Glyndŵr University is one of the FAW’s project partners for the centre.

They also took Huddle coaching sessions with pupils from Ysgol Morgan Llwyd in Wrexham and All Saints’ Gresford.

Huddle is the FAW Trust’s specially-tailored programme for 5-12 year olds as it seeks to boost the number of female footballers to 20,000 by 2024.

Course leader Sara Hilton said that she “jumped at the chance” to offer students the chance to take part in the event.

“It’s a great opportunity and it’s a great experience for the students to see another side of the professional environment with regards to the media aspect. It’s also great that they can showcase their coaching talents on the pitch by supporting the Huddle session,” she said.

Sara, who is also manager of Connah’s Quay Nomads’ women’s side, added that more women were joining the Glyndŵr course and that she wanted to see more women becoming football specialists.

“We had a similar event with the men’s side earlier this year so it’s fantastic to give the same kind of opportunity with the women’s senior squad as well,” she added.

Richard Chapman, first team coach at Holywell Town FC’s men’s side and youth team manager at the Airbus Academy, is on a foundation year with the BSc course and was one of the students at the event.

He highlighted the health and fitness aspects of Huddle, as well as how much the girls enjoyed taking part.

“It’s been brilliant. The children have had fun – it’s sort of bringing football back to a fun level where they have smiles on their faces,” he added.

Richard also praised the course for promoting both the academic and practical sides of football coaching as he looks to build a full-time career in coaching.