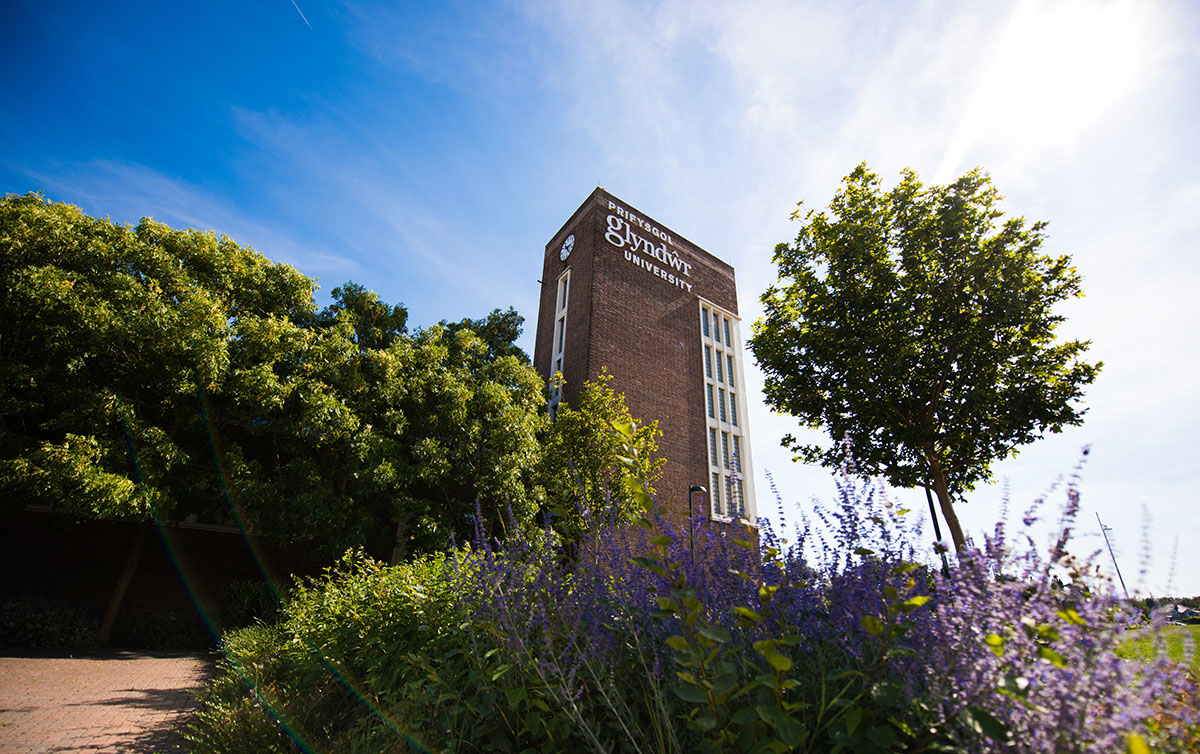 A Professional Policing student from Wrexham Glyndwr University has described how she worked to help move people to safety after major flooding in Bangor on Dee.

Ruth Tierney, who serves with North Wales Police as a Special Constable alongside her studies at Glyndwr, was among the officers who responded to last week’s floods – working under cover of darkness to help evacuate at-risk residents as the River Dee threated to burst its banks.

Based in Rhos Police Station, Ruth works in the Wrexham Rural policing district – which covers Bangor on Dee – and initially began her work on the evening of Wednesday, January 20 by assisting the night shift with their flooding response.

She said: “I planned to work until around midnight. I went in for 19:00 and the radio was very busy with calls concerning the flooding, as well as everyday police demands.

“I was happy to be in to assist in any way I could.

“While out on patrol there was a call around 23:30, expressing the need for all rural officers to attend Llay for a briefing to evacuate the residents of Bangor on Dee.

“I had the option to go home as I was told this could require our assistance for several hours, but I was willing to stay and help my colleagues with the major incident that was unfolding.

“So, we all kitted up into waterproof clothes and high vis jackets and made our way to Bangor on Dee - which was difficult as all surrounding routes into the village were flooded!”

Once on the ground, the policing team were told that a breach of the river was expected in the early hours of Thursday morning – somewhere between 4.30am and 6am. This breach was expected to lead to homes flooding in the village – and a major operation was needed to ensure residents were evacuated  from at risk properties before the Dee burst its banks.

Ruth added: “Our role was to assist the fire service with evacuating residents out of their homes to a place of warmth and safety.

“We also had to consider Covid-19 risks and were all in PPE. I was involved in phase one of the evacuation and worked alongside a police constable and a flood warden to advise vulnerable residents to evacuate their homes.

“The residents of Bangor on Dee were understandably worried to leave their homes, but there was a greater risk to life if they remained, so we advised them to leave.

“It was a rewarding feeling as a Special Constable to be involved in such large-scale operations as we are all keen to assist our colleagues and volunteer our time to help the community.”

Ruth – who has volunteered more than 120 hours in her role as a Special Constable since her attestation last September – worked throughout the night in Bangor, eventually returning home at around six the following morning.

She added: “I was unaware of any coverage of the events until late afternoon. It was surreal to see just how serious the flooding was when I saw the aerial view.

“On the ground we could hear the river - and the sound of the running water was daunting as it sounded very close. But I was surprised when I saw the footage of what Bangor on Dee looked like from above because we couldn't see it from the ground.”

Despite the challenges her role brings – as well as the challenges of studying in a pandemic - Ruth is enjoying both being a Special Constable and her degree at Wrexham Glyndwr University.

She said: “As a Special, no two shifts are ever the same - which is what I love about the job.  I am lucky to be a Special Constable to apply my knowledge into my University work, and everything I've learnt in University into my role.

“With the pandemic I think any university student can relate and say it has been a very surreal time. These are unprecedented times, and everyone is having to adjust with the ongoing changes. The tutors on the Professional Policing degree are very keen to get us all back in as soon as it is safe and practical to do so.”

District Inspector Gavin Gilmore said; “I would to pass on my thanks - not only to the Special Constabulary but also the local communities who assisted withtheir time, equipment and their compassion. This was a great team effort in very challenging and dangerous circumstances.

“SC Ruth Tierney must be praised for actions and assistance - we cannot serve the community the way we do, without the aid of Specials such as Ruth.”

And Wrexham Glyndwr University Lecturer in Professional Policing Andrew Crawford added: “Ruth did an excellent job at Bangor on Dee in testing circumstances – and she should be proud she has helped to keep her community safe with her work as a Special Constable.

“We encourage our students to take up roles as Special Constables as that service means you get to see the realities of the job up close – which is certainly something Ruth has done in the past week.”