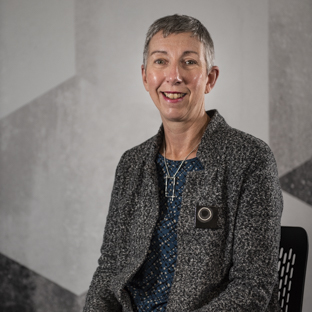 Angela is from Dolgellau and undertook her nursing, midwifery and health visiting career throughout the UK. When Angela returned to North Wales, she worked as a midwife in the Meirionydd area and moved to Wrexham to work as a health visitor in 2000. She started working at Glyndŵr in 2003 where she worked for 10 years, and then returned in 2018.

She also has an interest in using e-learning to support the student experience, as well as using social media such as Twitter to enhance student engagement. In May 2016, Angela received the prestigious title of Queen’s Nurse. In 2017 Angela became a Freeman of the City of London with the Worshipful Company of Spectacle Makers (@WCSM). Her hobbies include travelling, gardening, baking and she has a passion for watching football at weekends.

Interested in quality in healthcare and quality improvement, and the use of social media to support the student learning experience.